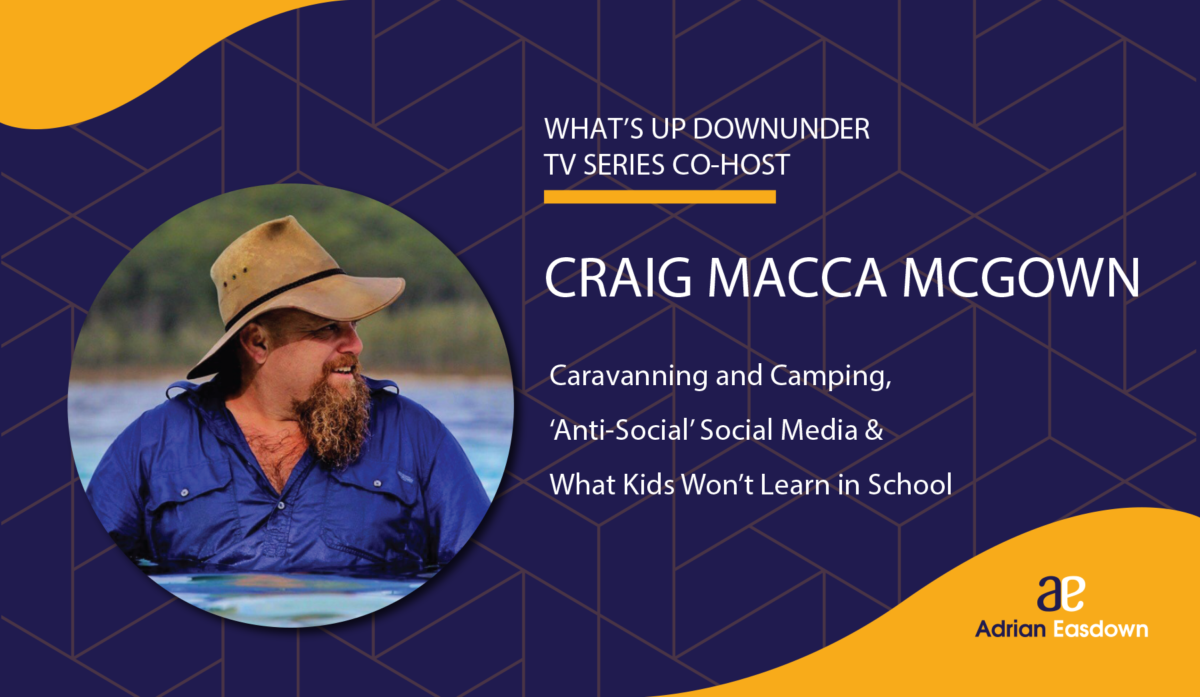 Craig ‘Macca’ McGown is a host on the Australian travel television show ‘What’s Up Downunder’, which celebrates all things caravanning and camping. I was lucky enough to catch up with Macca for the 80th episode of the ‘That Bad Review’ podcast series. We have a great chat about caravanning and camping and how Macca’s TV career began. We get serious about the negative effects of social media and finish with some insightful yet slightly unconventional advice to kids about learning.

This week’s episode begins with Macca telling listeners about his upbringing, a childhood that many Australian’s growing up in the 70s and 80s can relate to.  Macca explains that he ‘Grew up in a normal family, regional Queensland. Dad was a carpenter and mum worked at a chemist shop’.  Like most families, Macca says they didn’t have a lot of money, adding ‘To create that family getaway experience, camping was our thing’.

Macca’s earliest memories of being a kid involved sleeping in a tent. He remembers his Mum and Dad saving up to buy a caravan. This was how they did their holidays, caravanning and camping, not too far from home. Macca’s Dad would commute back and forth from work and the rest of the family would have a break.  ‘Camping, caravanning and travelling has always been in my blood’, Macca tells listeners. ‘Aussies just love going to a holiday park… It’s just good wholesome fun for the whole family. The kids get to interact with other kids. Mum and Dad get to make new friends of their own age. There’s a controlled environment for the kids to be able to entertain themselves’, Macca says.

Through the TV show ‘What’s Up Down Under’, and his personal brand, Macca hopes to inspire others to realise their dreams, as well as put their priorities in place. He has noticed that people say their dream is to travel, but they are too busy working to turn their dream into a reality. Often these same people are working to pay off the big screen TV and other home comforts. But they don’t want to be at home, they want to be out travelling. It’s a common loop people are caught up in; one Macca hopes to help break.

When asked how he feels about being in front of the camera, Macca explains that it doesn’t really worry him. Admitting instead that its public speaking that sometimes makes him nervous. Macca explains that the camera can’t heckle, but people can. Macca is often criticised for ‘putting on’ a strong Aussie persona. He reassures listeners that ‘What you see, is what you get’, insisting that his public face is his authentic self.

Our conversation turns to social media and the tendency some people have to use digital platforms as channels to say something they wouldn’t dare say to another person’s face. Macca explains that social media is necessary to grow his brand. However, he struggles with the fact that people seem to have lost the ability to use their manners online.  Macca shares his concerns with listeners.  ‘I think we’ve made a mistake with this social media stuff. It has become pretty anti-social in a lot of ways. And the damage that it can do to people’s lives is actually quite distressing’.

Macca is troubled by cases of young people who are bullied on social media, to the extent that they decide to take their own lives. ‘Social media is not real. The people on there are showing a wonderful life WHEN they are having a wonderful life. But when they are not, you don’t see them on there,’ he reminds listeners.  Macca suggests we need to really focus on making the social media and online space more positive. ‘If you wouldn’t say something to someone’s face then don’t put it on social media’, Macca urges.

What Kids Won’t Learn in School

I asked Macca to share some advice to kids, to give them a head start in life. He laughs, suggesting that not many people would want him to give advice to their young ones. Macca explains further by suggesting that his thoughts may differ from those who support traditional learning methods.  And after listening to what Macca had to say, I agree with him. His ideas around what kids need to learn at school could be seen as controversial. Yet they represent a perspective offered by quite a few of my podcast guests.

Macca didn’t understand why he went to school. No one really took the time to explain it too him. Like many young children, he struggled to listen and pay attention to what was being taught. As a result, Macca says that he ‘didn’t learn much of anything really‘. Despite this, he went on to study carpentry. Macca then used his newly developed skills to find jobs in towns all around Australia. Leading a nomadic lifestyle, Macca lived in his camper trailer and travelled the country. It was his extended time on the road that inspired Macca to design his own range of camper trailer. His range of campers eventually led Macca right to his dream job.

Using his own story as proof, Macca suggests that kids only need to learn the basics in school.  On the ‘must learn’ list is reading, writing and times tables. Macca admits that kids who want to be rocket scientists will need to undertake a lot more study. But essentially, they should concentrate first on finding what it is they are passionate about and then focus on developing skills in that area.

Macca urges listeners to follow their hearts, especially if they dream of travel. Don’t wait until the kids grow up and leave home. Instead pull them out of school and take them caravanning and camping around Australia. He insists that kids get far more out of these types of experiences then what they learn sitting in a class room. He wraps up our chat with one more piece of true Macca wisdom ‘That smile that is all important, will be far easier for you to put on your face if you’re following your heart’.

Also, in this week’s podcast

In this episode of the ‘That Bad Review’ podcast, Macca and I discuss: