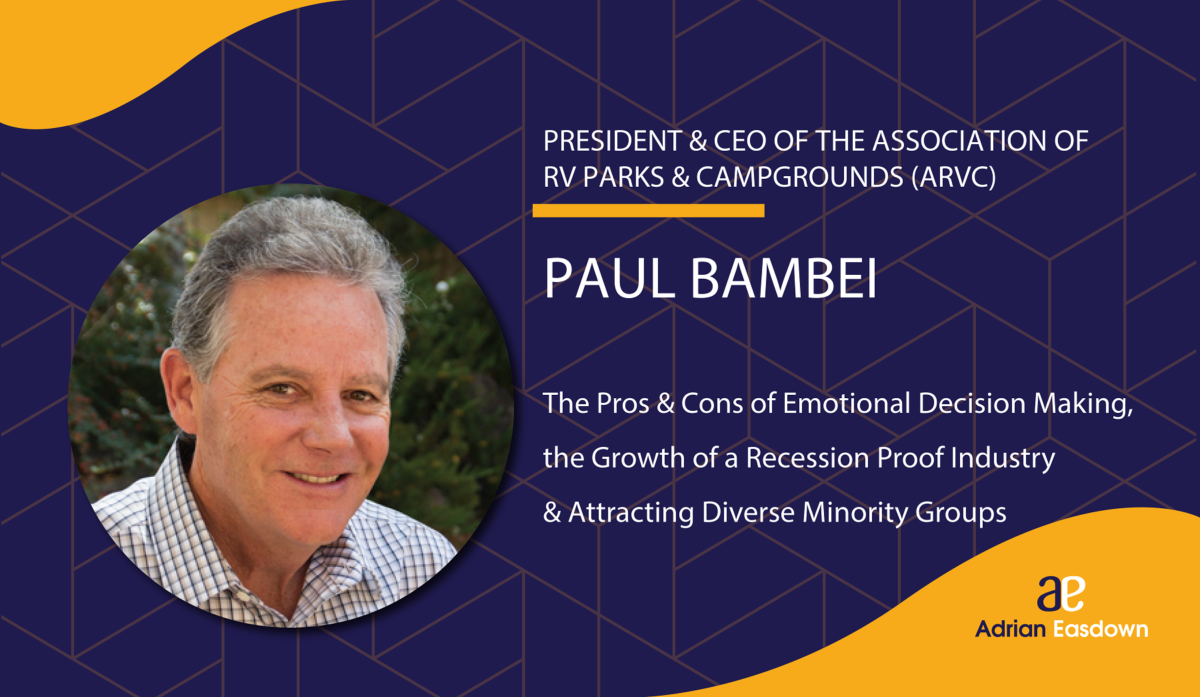 Paul Bambei is the President and CEO of the Association of RV Parks & Campgrounds (ARVC), based in Denver, Colorado. I was fortunate enough to catch up with Paul at the Tourism Innovators Conference held at the Gold Coast this year and chat with him about the parallels and differences between the Australian and American markets.

Paul Bambei was semi-retired when he received a phone call from the Association of RV Parks & Campgrounds, wanting to discuss leadership opportunities within the association. Paul’s business had recently been purchased by Microsoft’s co-founder Paul Allen, and he was just settling into a more relaxed lifestyle. The association was looking for someone from the private sector, experienced in a fiscally responsible role, someone who could understand balance sheets, profit and loss statements and most importantly a people person. Paul had previously worked for a large fortune 500 company, and at one point had approximately 1000 people reporting to him.  While not overly keen to re-enter the corporate world, once Paul met the relaxed and welcoming people he would be working with he was sold on the position.

The Pros and Cons of Emotional Decision Making

Similar to what is happening in Australia, corporate organisation are entering the American RV and Camping Industry and shaking the foundations of what private park owners have considered acceptable. Corporate companies bring a level of maturity to the market, introducing new efficiencies such as dynamic pricing, advanced technology and systems, all focussed around increasing profitability. Decisions and changes made by corporate businesses are designed to increase productivity and achieve maximum work levels from staff. In contrast to this, it’s the private entrepreneurs who represent 75% of association that have a strong emotional connection with campers. While this may be something the corporate businesses are not too concerned about, it’s a quality that attracts trust and loyalty from campers. Private campground owners are more in tune with campers needs and wants, and while they are more resistant to raising rates to increase probability, their emotional decision making tends to win over campers and encourages repeat visitation, proving guests prefer authentic connections over corporate efficiencies. During our chat, Paul provides a great example of a private campground owner in the USA who despite his out of date website and ‘old school’ ways, operates a campground with over 1200 sites that are always occupied, and his business consistently receives 5-star reviews on TripAdvisor.

The Growth of a Recession Proof Industry

During the Great Recession of 2007-2009 most park owners within the campground industry in America managed to keep their head above water. Fast forward ten years later and a large number of park owners have been enjoying double digit grow for several years. This growth is not isolated to park owners, with industry partners such as van manufacturers witnessing similar growth. Since the recession, van manufacturing in the United States has increased steadily year on year, resulting in a staggering half a million vans being manufactured in the last financial year alone. Paul explains to listeners that over 80% of the vans produced were towable, which is the vehicle of choice for millennials. Paul also describes how a growing number of millennials who live in major cities and don’t even own a car, are finding alternative solutions that ensure they can experience a dose of the great outdoors on a regular basis.

As discussed with podcast guests in previous episodes, millennials are a united force driving change in multiple sectors, and it’s evident that business owners need to adapt their offerings to satisfy the needs of this demanding generation, or risk being left behind. Those within the RV and Campground Industry who are smart enough to take advantage of the revenue available by attracting this dominant generation will continue to enjoy growth in what is considered a recession proof industry.

An emerging market within the USA is the diverse minorities groups such as Hispanics, African-Americans and Asians. Paul explains to listeners that people within these demographics prefer to camp in groups and often travel with multiple families, often resulting in a group of 20 or more people.  He suggests that as an industry we need to work together to encourage these minority groups to increase the regularity of this type of travel and ensure such groups understand that camping is a great way to celebrate special occasions such as weddings, birthdays and reunions, together as a community.

I expand on this topic in the podcast, explaining that based on my own experience as a holiday park operator, groups are a very attractive target audience. People are more likely to socialise and have a good time when travelling together in a group. Group travellers are more likely to establish positive memories, increasing the likelihood of returning in the future, bringing others with them.

These are only a few examples of the hot topics that Paul and I discussed. Listen to the podcast episode to hear our thoughts around: