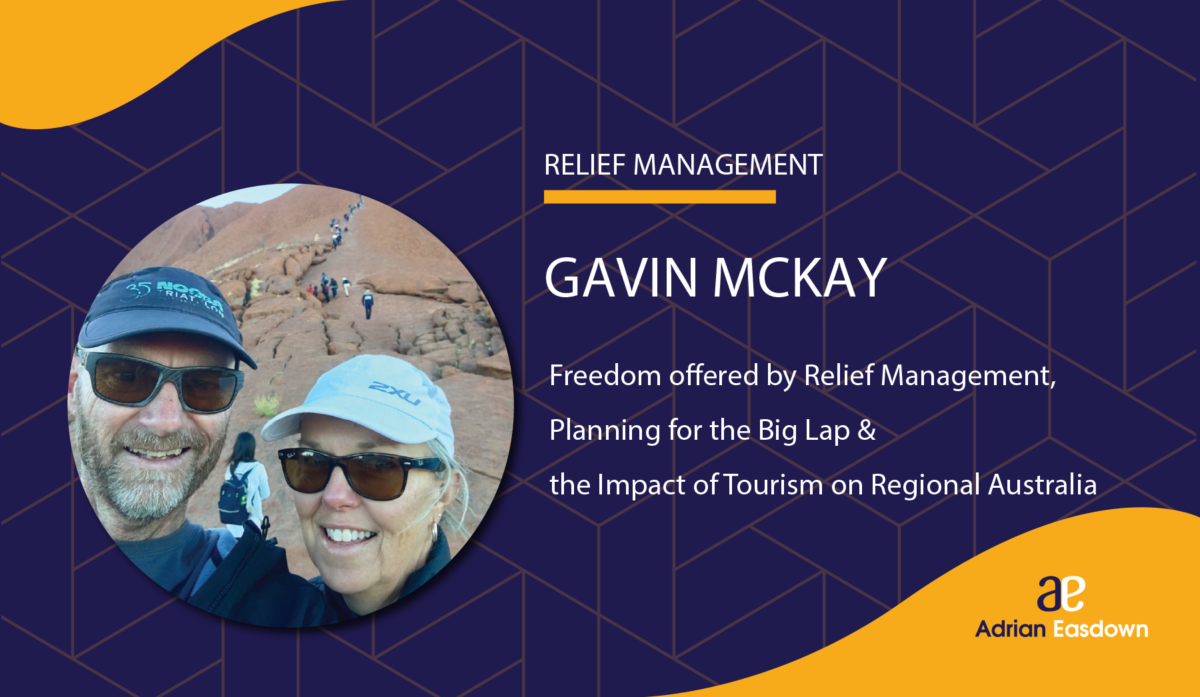 Gavin McKay and his wife Steph are relief managers, traveling Australia. It’s not something they fell into, it was a meticulously planned life decision, an idea hatched over thirty years ago. However, despite a well-planned itinerary, Gavin and Steph’s journey has switched directions multiple times. Their Big-Lap became more about discovery and adventure, rather than ticking off the towns on their list. I was keen to catch up with Gavin and ask out how their trip was going and what lessons they have learnt along the way.

The decision to pack up and leave well-paying careers, in high level management, was not easy for Gavin and Steph, but one they were determined to make. While it was part of their life plan, it was a decline in Gavin’s health and circumstances that led to an earlier than planned departure. According to Gavin, it was the right time, and although daunting, they have no regrets.

‘We’re open to change all the time,’ Gavin explained.  ‘We started out with a plan, that was to do the lap.  But we got to Birdsville and went, well we wouldn’t mind getting back into the industry’.

Gavin and Steph spent four months in Birdsville, after landing a job as relief managers at the local caravan park. They really enjoyed their time in the small country town, getting to know the locals and the people who passed through.  Highlights were the Big Red Bash and of course, the Birdsville Races.  The opportunity allowed Gavin and Steph realise the freedom they had; it changed the way they travelled. Gavin explains, that they now follow the work, or travel to places recommended by others, instead of following their itinerary.

Planning for the Big Lap

Travelling Australia was a long-time dream for the couple. They had years to plan what they wanted to see and when in their trip they were going to see it. Gavin spent a large portion of the last two years researching and adding places to their list.  However, once they got on the road, they realised that despite the time spent planning, when you embark on such a big trip, it’s the people you meet and the experiences you have, that dictate how the journey continues.

By chatting with locals, or talking to guests in tourist parks or camp sites, Gavin and Steph learn about places and experiences they never knew existed. Gavin explains that this is why their plan has changed so many times, adding that the constant changes does not worry them. Life has become very relaxed; they are in no rush to get around.

‘I think that’s why we’ve enjoyed it so much’, Gavin says. ‘Because we’re not on a time schedule. We move around and do what we want to do, when we want it’.

Impact of Tourism on Regional Australia

In the two years that Gavin and Steph have been travelling, they have visited many places. They spent a lot of time along the South Coast of NSW, Gavin speaks very fondly of the area. During our chat, we discuss the devastation that has swept across the region and other areas of Australia. We chat about how the worst affected regional areas rely on tourism to keep their communities going.

Gavin shares some recovery advice, based on time he spent at Adel’s Grove, during a period after they lost most of their infrastructure to a fire. Gavin encourages people to pull together and ensure the rebuilding stage happens as quickly as possible. He suggests that while it may not be possible to have all areas of a business operational straight away; the aim should be to can get up and running with the basics, as soon as possible. We chat about how vital this ‘open for business’ stage is, and that it is communicated effectively to potential visitors.

Also, in this episode, Gavin and I chat about:

Link to listen to podcast episode 97 with Gavin McKay