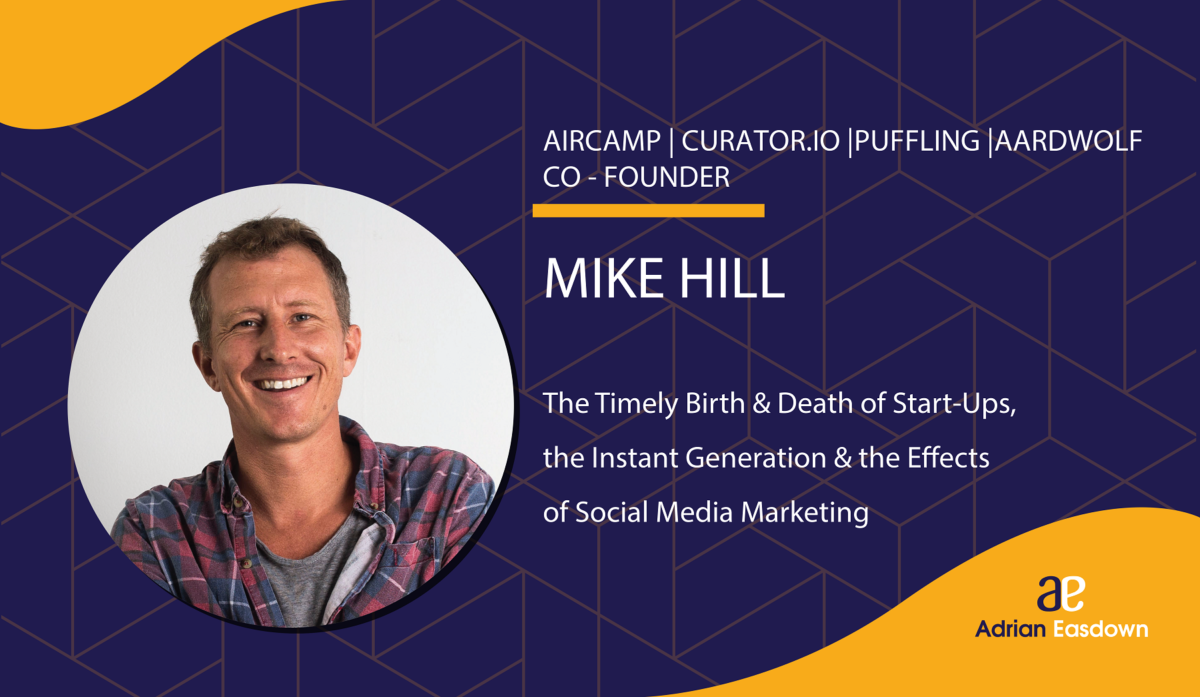 When Mike Hill hears someone complain about a service, or lack thereof, he would never dream of tuning out. Instead he probes for more information, he loves hearing people complain. This might seem a little strange, but when this tactic is executed by an individual with great analytical skills, a marketing background and a savvy business sense, it can only really lead to one solution, a start-up business.

The Timely Birth & Death of Start-ups

This week I chat with Mike Hill, an Englishman who arrived in Australia in 2006 and with a laptop and some seed money, founded the digital agency Holler Australia. Over ten years, Mike and his team grew Holler to be one of the country’s largest digital agencies, working with clients such as Tooheys and Lion Nathan. While safe players within the start-up industry believe it’s best to focus energy on one start up at a time, Mike believes timing should be the dictator behind grabbing hold of an opportunity and running with it.

It’s this belief that saw Mike leave Holler in 2016 and in the same year co-found Aardwolf a start-up studio for brands and Puffling, a start-up focused on finding flexible jobs for back-to-work parents. If two new start-ups weren’t enough of a challenge, Mike recently launched Curator.io, admitting that there was no design around the launching of each start-up, instead when a problem presents itself, he can’t help but try and solve it. On the flipside, Mike is just as quick to kill a project if it’s not performing the way it was designed to work. Mike explains to listeners, that if a business is not viable the best thing to do is to kill it, as keeping it going is simply not worth it. In the podcast episode, Mike talks about how he has up to ten business ideas a day and provides insight into how and why ideas should make it through to the design and eventually to the execution stage.

Aircamp was born from the desire to service the needs of the average camper. A Dad that takes the family camping once or twice a year, not particularly because he enjoys it, but rather because he knows it’s a good, healthy thing to do with his kids.  The problem is that these Dads and other emerging campers are from a generation who are conditioned by the convenience of being able to confirm everything instantly online, with the click of a button. Many are averse to making reservations over the phone, especially during working hours and they wouldn’t risk just turning up without a booking. The solution? Aircamp, a digital booking engine available via a website and an App, designed to take the stress and fuss out of finding and reserving camping spots and sites in caravan parks.

Technology serves an integral part of Aircamp’s target consumers lifestyle, a market that demands a digital solution for every transaction needing to be made. During the podcast, Mike provides an example whereby after National Parks introduced an online booking option, their average camper age plummeted.  When the younger generation realised they could book online, they couldn’t wait to make a reservation, flooding National Parks campsites. After hearing this example, combined with listening to a woman state that it was easier to go to Fiji than it was to organise a camping trip in Australia, Mike knew he had to address the issue on a larger scale. Aircamp offers an easy solution when confirming a camping or caravanning holiday and in turn encourages Aussies to holiday locally, as opposed to travelling overseas when they need a break.

The Effects of Social Media Marketing

The caravan and camping industry has faced many challenges, with each new challenge fostering change.  While some may think the spotlight Instagram in particular shines on the industry has had a negative effect, changing it into something completely different to what traditional camping once was, one thing is certain, good or bad, Instagram and other social media platforms have had an incredible influence on marketing the industry.

The increased exposure brought about by the sharing communities’ obsession with the ‘Look at me’ status update that is prevalent across all forms of social media, has resulted in a massive shift within the industry, fiercely driven by enthusiasts wanting to show people what they are doing, in real time. Posed and styled images have led to people craving an idyllic escape, let it be camping with family, glamping with friends or hiring a tiny house and becoming a minimalist, if only for the weekend.  The need to share sparks a longing in others, who often, ironically yearn to getaway and disconnect from technology.

In the episode, Mike and I also discuss how the sharing community sparks inspiration in entrepreneurs and from such inspiration new trends are constantly arising.  Uber-glamping in the Philippines and new models such as Tenter in the USA are born. Despite the ever-changing landscape within the industry, enough of the core values remain, for now at least. For many families camping is becoming easier, tents are cheaper and much better quality, proving advancements don’t need to take away from the experience, but instead can make it better.

This week’s episode touches on all of these important topics and how each is having a significant effect on the caravan and camping industry.

Also in this episode, Mike and I chat about:

You can listen to the full episode here.