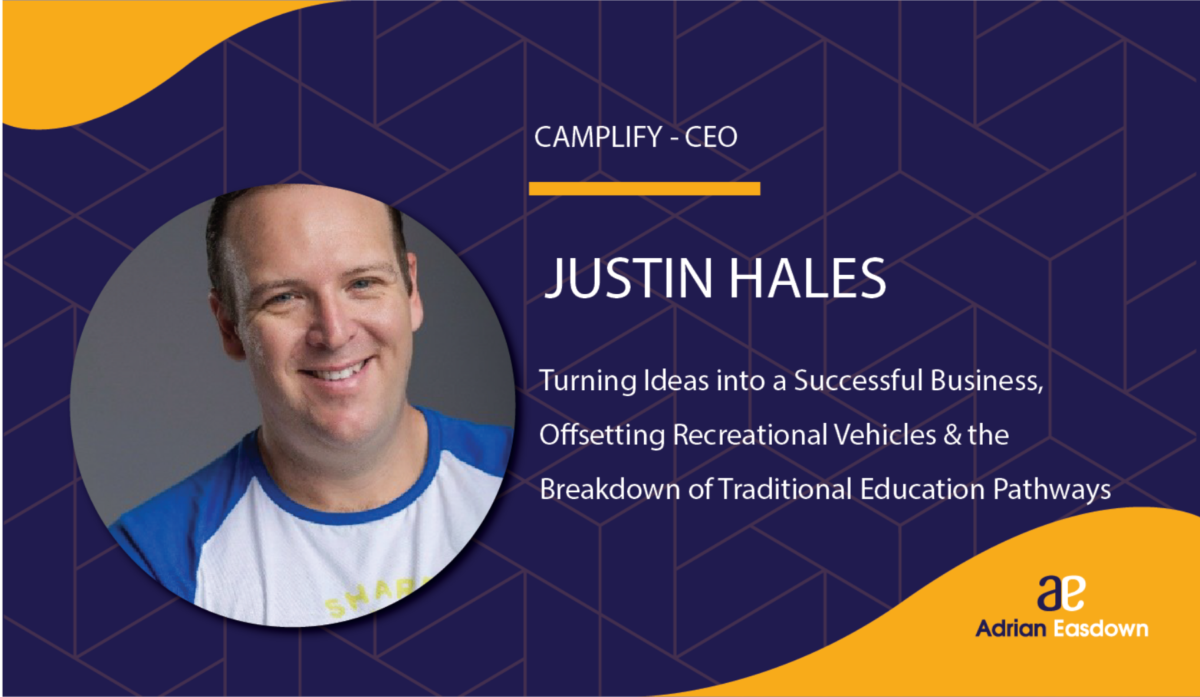 Justin Hales is the founder and CEO of Camplify, a recreational vehicle (RV) hiring platform and a major player in the share economy industry.  After dominating the Australian market, Justin and his team launched in the UK, seeing fantastic growth in the last twelve months. Camplify will soon expand into other European countries and places like New Zealand. I caught up with Justin’s for a chat about Camplify and a few other intriguing topics, available to listeners on this week’s podcast.

Turning an Idea into a Successful Business

Justin grew up caravanning and camping, repeatedly visiting the same holiday park in Port Macquarie with extended family. Their traveling party was so large they would take up a whole role row in the park.  Caravanning was ingrained in his culture, with memories of holidays spent meeting new people and having fun.

Justin shares with listeners that the idea for Camplify came from the desire to satisfy a personal need of Justin and his wife. To Justin’s delight his wife announced one day that she wanted to hire a van and get away with their family and dog. Justin began researching suitable hire options and soon realised the pickings were slim. He wondered what other people did when they wanted to holiday in a van but didn’t want to own one. Later, as Justin and his wife walked their dog, they started noticing the number of vans parked on the side of the road unused. It was a lightbulb moment; Justin was surrounded by solutions to his very own dilemma.

The very next day Justin received an email from his boss informing staff of a business accelerator program. The program was calling for motoring industry related business ideas to develop.  Justin was accepted into the program which helped him test, develop, progress and substantiate his idea. In the podcast Justin explains this process in more detail. He also tells listeners how he overcame fears associated with the need to protect his idea.

After much campaigning, Justin and his team had a win for van owners with the Australian Taxation Office. They campaigned to have recreational vehicles recognised in the same category as holiday rental investments. Meaning van owners can now list their vehicle and offset costs against their income. How the offset costs are calculated is explained by Justin in the podcast.

When you look at Camplify’s online van listings it’s clear to see there are lots of people are making money from the platform. Justin confirms this, adding lots of van owners are doing really well financially. He adds that some owners are buying multiple vans to invest.  In the podcast, Justin gives some great advice to people considering listing their van, including what hirers are looking for. Justin also has some valuable advice for park owners, who are welcoming the non-van-owning-caravanner to their parks. Justin’s advice highlights the opportunity both parties have to benefit from what Camplify has to offer.

The Breakdown of Traditional Education Pathways

Justin was drawn to technology as a child, and it doesn’t surprise him that he ended up founding a company that is operated entirely online. Justin’s Dad was a teacher and also an avid technology junkie. He completed a computer science degree in the late 1980s when most people didn’t even own a computer. His Dad’s love for technology meant that Justin always had something new and exciting to discover at home. Despite his love for technology, after finishing high school Justin undertook a teaching degree.

Justin followed traditional educational pathways laid down by society. Pathways that encourage students to study hard at school, get good grades, then go to university and get a degree. Once the degree is completed, students are expected to work it out from that point forward. They are left to hope the right job, matching their specific skills, comes along. After following this very path, Justin realised that his love for technology was too strong. Instead of teaching in a classroom he wanted to introduce new ideas to people in a less traditional way, using technology through online channels.

Justin urges the youth of today to find something they are really passionate about and put their heart and soul into  it. He points out that when people are young, they have an opportunity to make the most out of what they love. They can often do this without limitations that arise when life commitments start to accumulate, such as a mortgage. Justin points out that the job market and the employment sector is evolving so fast that jobs that will become available next year may not be supported by a degree. Instead roles will be filled by people who are super passionate about what they love to do. Jobs will be filled by people who up-skill themselves, those who do not wait for a degree to be developed.

Also in this week’s podcast

In this episode of the ‘That Bad Review’ podcast Justin and I also discuss:

Listen to the Podcast