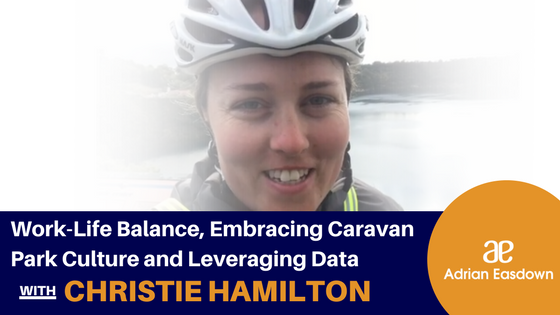 Let’s face it, some people like to put caravan parks into a box – stereotyping not only the people who run them but also those who visit them. Buying into these stereotypes is damaging because they’re mostly outdated and untrue.

On a recent episode of the That Bad Review podcast, I chatted to Christie Hamilton about this exact issue. Christie used to be one of those people who didn’t harbour any negative feelings towards caravan parks, but definitely had some generalised ideas about them. That was until she took part in the Indian Pacific Wheel Race, a cycling event that saw her stay at caravan parks across Australia.

‘I didn’t realise that caravan parks were basically like mini-resorts, one I stayed at in Portland, the guy – owner I think – was absolutely fantastic and he even helped me fix my bike – nothing was too much trouble.’ Christie continued, ‘I think to go out and do a big tour of the country makes you an interesting person to start, so I’ve found within caravan culture a lot of amazing, friendly and open-minded people.’ Along with her travels, Christie got to the core of caravanner culture, and according to her she ‘did not run into a single bad person the entire trip’.

This is stuff I love to hear because it’s validation for what I feel about caravan parks and the culture that surrounds them. There are a certain camaraderie and friendliness that exist in this style of travelling and holiday-making. It’s about looking out for one’s neighbour and being generally interested in what’s going on around you – a sense of adventure if you will.

This is perfectly in keeping with another concept touched on by Christie during our chat – the idea of trail magic. ‘Trail magic’ is defined as ‘an unexpected act of kindness, a quintessential part of the trail experience for many long-distance hikers.’ While this particular brand of kindness and empathy is focused on long-distance hikers, trail magic certainly applied to Christie in her extreme biking endeavours, and traces of that extend to the very act of caravanning itself.

In some cases, you’ll need other people to help you fix things when they’re broken, you’ll need them to give you directions when you’re lost or share something when you need it most. It’s a recognition that everyone is on some sort of journey, and that we’re all in it together. It’s obviously something I’m passionate about, but before I got off the hyperbole deep end I’ll just say that there is something special about caravan parks and a lot of it comes down to simply how you treat other people. No idea what I mean by this? Give caravanning a try and see for yourself.

To learn more about Christie’s work click here, and if you’re interested, World Nomads has a good write up on caravaning culture.  You can also check out our entire conversation here!